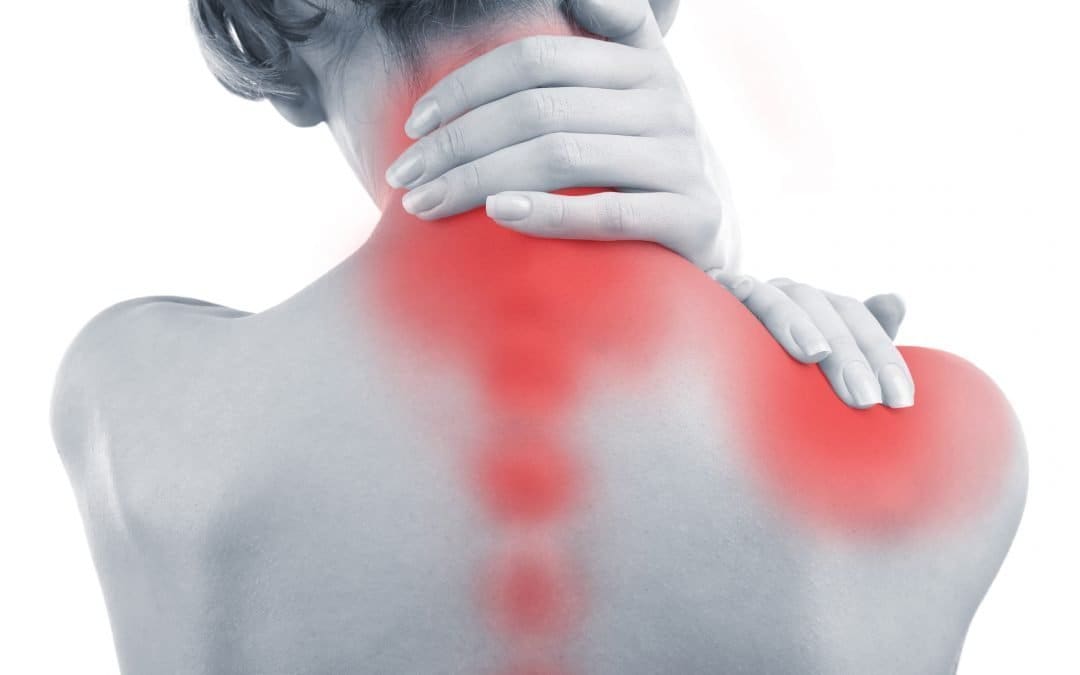 Hello, everyone! Welcome to this week’s blog!

Today, we are going to go through the links to health problems that relate to the brain. As we go through each example, we are going to talk about how specific stimulation of the brain can make a world of difference. At the end, we will come back to the connections we are finding between all of these  systems. This concept is vitally important for our health. If we miss the connectivity, we miss EVERYTHING. Before we can get to that, let’s hop into the power and importance of a healthy nervous system in detail!

In our last post ( ”Healthy Nervous System = Healthy Body”), we described how a healthy nervous system needs these 3 things:

We are going to talk specifically about the stimulation part of the equation in this article, as we thoroughly covered  oxygen and blood sugar in the last post.

Stimulation is the part most people are extremely unfamiliar with because people are unaware about how their brain processes information. We covered some of the basics in our blog article entitled “Why You Must Have Brain Rehab to Help Your Chronic Illness.” Here are two clinical examples of the importance of brain activation/stimulation:

I. Chronic Pain and Your Brain

Most patients experiencing chronic pain have tried almost every treatment option before they come to our office. Constant pain puts most people on edge. The constant pain makes most other stimuli more acute. These people do not want to be socially active because handling noise and/or bright lights is hard on them. These people do not want to be physically active because it often hurts and they often struggle with depression due to the pain (we will expand more on that topic in the next article). What can we learn about a person’s brain who has chronic pain?

A study done in the journal “Pain” in 1995 showed increased activity in the right anterior cingulate cortex in patients experiencing chronic pain[i].

Another study done on patients with fibromyalgia found patients’ brains to show increased firing with less stimuli in the cerebellum, inferior parietal lobe, contralateral putamen, and superior temporal gyrus[ii]. These are all different areas of the brain that can be involved in the perception of pain.

We all can sense different inputs like hot, cold, sharp, dull and the amount of pressure when touching something. At what point do these inputs become PAINFUL? This study found patients with chronic pain experienced pain from sensory input before healthy people! This means the same amount of pressure elicits pain in one person and nothing in the next. That is a change in your nervous system! That is a change in the way your nervous system interprets the world!

What is so interesting is that we can test these parts of the brain with a neurological examination if you know what to look for. The following areas have been studied in association with chronic pain:

The superior temporal gyrus (STL) is our primary auditory center. So, how is your hearing? The STL also helps with auditory spatial perception. How well can you identify where a sound comes from? The STL also fuses form and motion. My best example of this is taken from a pheasant hunter. Pheasant hu 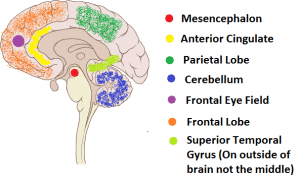 The inferior parietal lobe (IPL) is a large structure, but we are able to examine this area of the brain by a few different tests. Functions  of the IPL include the ability to identify objects by touch and the right IPL (right side of the brain) helps with solving spatial puzzles. How good are you at constructing things with your hands or interpreting maps? The left side helps with language. How good are you at rhymes, poems, or other manipulations of language such as Boggle, Scrabble or Wheel of Fortune?.

The cerebellum is the area of your brain concerned with balance and is the most easily affected by alcohol. A good example of this is the field sobriety test. Can you put your hands out in front of you, close your eyes and touch your nose or do you miss the tip of your nose with either finger? Can you walk a straight line one foot in front of the other? Can you balance with your feet together and your eyes closed? Can you balance on one leg with your eyes close? Do you have problems with motion sickness in cars, boats, airplanes or amusement rides? This is a part of the cerebellum that communicates with your inner ear called your vestibulocerebellum.

The anterior cingulate is highly connected to the emotional response connected to behavior. It is often overactive and this can create strong and often out of control behavior. When it is not balanced with other parts of the frontal lobe, like the polar-orbital region (which is connected to actions and their consequences), people tend to be ruled by their emotions. Do you have difficulty with your emotions running away with you?

The mesencephalon is the very top of the brain stem. This part of the brain receives both auditory and light stimuli. It is a primitive center of the brain with more subconscious and reflexive function. Often people with mesencephalon problems do not like bright lights or loud noises. They may not want to drive at night, always need sunglasses and/or are very uncomfortable around loud noises. This area of the brainstem contains the Edinger-Westphal Nucleus, which helps constrict your pupils. I can often pick up on abnormalities here by watching how a patient’s pupils react to light. Many people are so dramatically imbalanced I can just look at the pupils and see that they are dilated or constricted all the time! People with mesencephalon problems often startle easily and can cry easily. This part of the brain is also responsible for triggering your physiological responses to pain. The expression “Pinch me to stay awake” involves this part of the nervous system . When this area is overactive, your body can be constantly over-reacting to stimuli as if they were painful! The over-activity in this area is typically a result from low frontal lobe function, which fails to inhibit (or dampen) this more primitive area.

Did you enjoy the video? Let me point out a few things. The boy (Will) has a huge problem in the mesencephalon, which is why he wears the sunglasses all the time. Did you see his reaction when Dr. Carrick had a light in his eyes? This whole body reaction I only see in the worst cases, but how are you going to be on Dateline ABC unless you have a dramatic example? The woman (Stacy) has huge problems in the cerebellum (the balance center in the brain) and vestibular system. ABC chose patients with movement disorders because they are some of the most dramatic on film, but this same method works for patients with all kinds of problems (depression, pain, fatigue, inability to sleep, anxiety, etc). The point of this video is to show the power of brain stimulation when it is done correctly!  The brain runs everything and this type of brain stimulation can help so many chronically ill people. 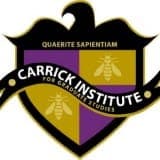 Did you see some of the treatments for these patients? Stacy had two doctors moving her arm and leg on the right side (as seen in the video). They are stimulating the right cerebellum and that stimulation can bring her back to balance if that part of the brain is dysfunctional! Is that the answer for all balance problems? Should we just tell every person with a balance problem to move their right hand and leg and it will be fixed? NO!!!!!!! The therapies done for Stacy were specific to her. They were aimed at the specific parts of her brain that Dr. Carrick saw were failing on his examination. What about Will? They used therapies aimed at multiple areas of the brain specific to Will, not everyone else with similar problems or symptoms. Once again, is this the answer for everyone with migraines and significant decreased arm swing? NO!!!! These exercises were given to try and stimulate the parts of the brain that Dr. Carrick felt needed stimulation after his examination of Will.

After seeing that video I often get questions about the gyrostim. Without getting too far down the rabbit trail, the gyrostim was developed based on years of research surrounding eye movements and vestibular function. You have an amazing set of reflexes that balance your eyes movements with your vestibular system. The vestibular system is used for balance and knowing your position in space as your move your head and body around in the environment. Have you ever watched a bad home video where the camera is jumping all over the place? Do you realize your head does this all the time? You have reflexes in your brain surrounding eye movements that keep you balanced. For this reason, we can get a ton of information about different parts of the brain by watching how eyes move in both smooth motion (pursuits) and quick/jumpy motions (saccades). While we do not have the very expensive gyrostim at our office, we can still use other exercises with our patients to help stimulate those same areas.

Here is a link to one of the teachers in the functional neurology program at the Carrick Institute. Showing a super simple exercise. Dr. Mike Powell http://www.youtube.com/watch?NR=1&v=XIfIWk0VscY demonstrating smooth pursuit exercises.

Do you see how simple some of neurologically stimulating treatments are? The key is that these exercises stimulate the part of your brain that needs stimulating, which is based off of your examination findings! Our neurological therapies are varied and include exercises that stimulate many different areas of the nervous system. Most therapies are sensory-based therapies like eye movements, light, sound, vibration, vestibular exercises, balancing exercises, gait exercises, and many more. All these exercises target different parts of your brain and they can make a world of a difference in helping the weak parts of your brain function in a healthy way again. Each patient needs their own specific exercises based off of their OWN examination findings. We can’t mention this concept enough!

Do you have a health problem? Have you considered that a brain imbalance could be a missing piece in why you can’t get better? Have you ever had a functional neurological exam? If you haven’t, please consider coming into our office or seeing another functional neurology doctor who has studied at the Carrick Institute.

In our next post, we are planning on illustrating some neurological connections surrounding patients with depression. It will be similar to this article, but we’ll look more specifically at some of the areas of the brain involved with depression rather than the links to abnormal pain perception. Have a great week!!!